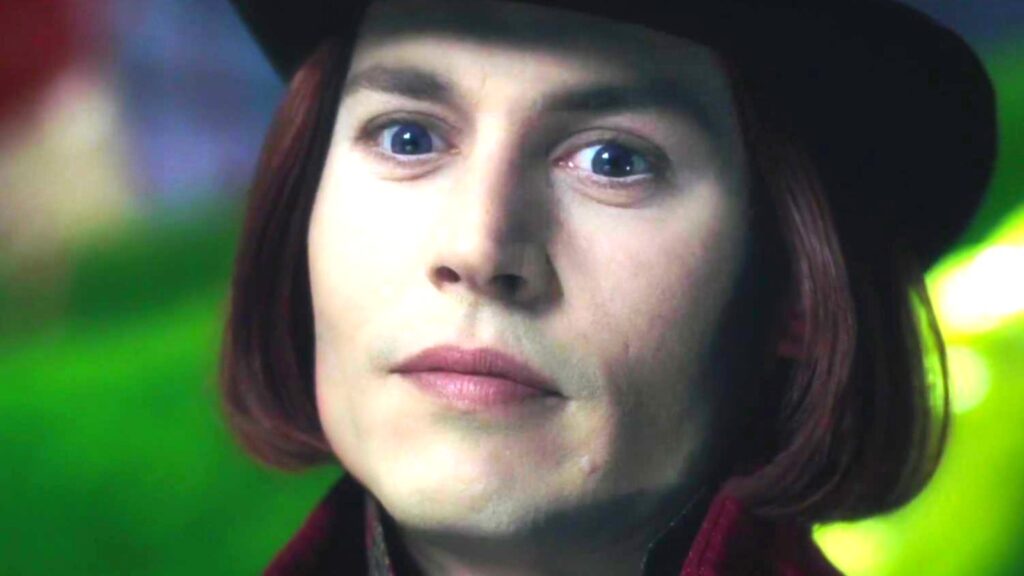 The 2005 Tim Burton flick „Charlie and the Chocolate Factory” revisited one of the most celebrated pieces of children’s literature for a new generation, presenting a modernized tale of the young boy on an adventure of a lifetime after winning a golden ticket and a tour of the world’s most famous candy manufactory. What he finds there is not only a whimsical world of tasty treats, but also a series of dangerous trials (engineered by Johnny Depp’s take on Willy Wonka) to test the character and his fellow contest winners.

Clearly, the 1971 version is held in higher regard by most; yet, Burton’s take has its own following. From the elaborate production design to the intricacies of the actors’ performances, more went on behind the scenes of the 2005 film than you might realize.

The Dahl estate were the ones calling the shots

Intellectual properties can be tricky, and that was especially the case for „Charlie and the Chocolate Factory.” Roald Dahl reportedly hated the Wilder „Wonka,” going so far as to consider sponsoring a campaign against the movie’s U.S. release. So, it stands to reason that following the author’s death in 1990, his estate would be cautious about how his works would be represented in future adaptations. In 1991, Warner Bros. began talks to acquire the rights, completing the deal in 1998.

There were, however, strict stipulations from the Dahl estate regarding how a second movie adaptation of „Charlie and the Chocolate Factory” would be handled. According to the L.A. Times, Dahl’s widow, Felicity „Liccy” Dahl, had complete control over many of the movie’s creative decisions, including casting and authorship of the script.

„My main concern in making any film based on Roald’s books was the screenplay,” Dahl told the Times in 2005. „The skeleton of the script must stick to the book, but [the failed scripts] almost tried too hard to stick to the book. It’s a terrible task for a screenwriter.”

The movie was in pre-production limbo for years 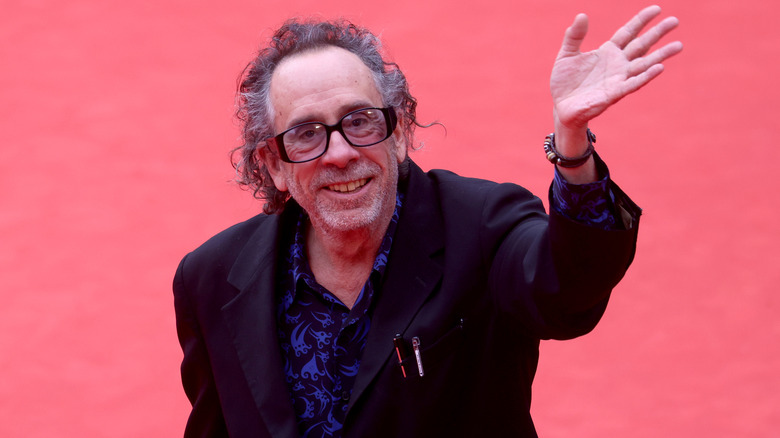 Thanks to Liccy Dahl’s gatekeeping of her late husband’s work, the development of „Charlie and the Chocolate Factory” was an arduous process. Warner Bros. made many suggestions for writer and director teams to Dahl, including Gary Ross („The Hunger Games”), and screenwriter Scott Frank („Minority Report” and „Logan”). Although initially approved by the estate, the team had to back out when Frank reportedly admitted that he had too many scripts on his plate.

Shortly after Frank and Ross’s departure, „Lion King” director Rob Minkoff began negotiations to take over, with Gwyn Lurie („Nine Lives”) set to write the script. However, talks with Minkoff fell through, and WB president Alan Horn hoped „Liar Liar” director Tom Shadyac could bring some comedic chops to the project. Dahl’s widow quickly vetoed Shadyac, leaving the film once again without a leader at the helm.

At last, both the Dahl estate and Warner Bros. agreed on Tim Burton in 2003. Lurie was replaced by John August as screenwriter; August and Burton  had previously collaborated on „Big Fish.”

Casting for Willy Wonka was a battle royale 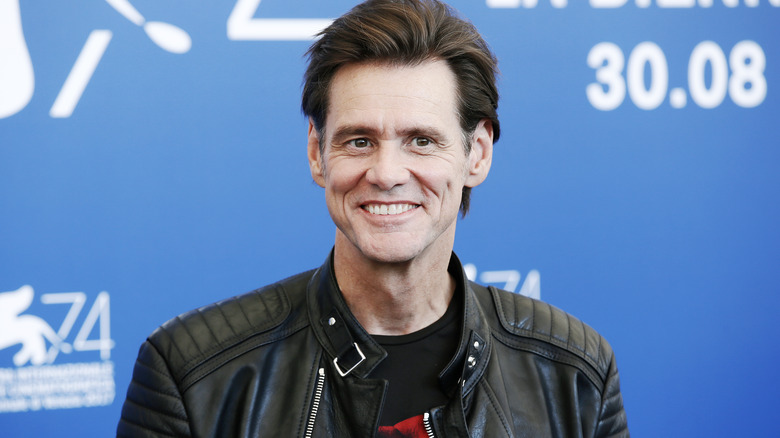 Now that „Charlie and the Chocolate Factory” had found its director, it was time to cast the key role of capricious, whimsical, slightly demented Willy Wonka.

During the early development of the film, many names were thrown into the ring to fill the proverbial top hat famously worn by Wilder. Nicolas Cage, Christopher Walken, Robin Williams, Michael Keaton, and Brad Pitt were among the long list of possible candidates rumored to be considered for the role (according to Moviefone and IFC). Incidentally, Pitt’s production company, Plan B Entertainment, helped to finance the movie despite the actor not getting the part.

In 2001, according to the New York Post, shock-rocker Marilyn Manson caused a stir when he falsely claimed that he had been given the role of Wonka in the new movie. This led to an adamant refutation from then-director Gary Ross, who insisted that he would never have cast Manson „in a billion years.” After Ross left the project, Warner Bros. pitched Jim Carrey to play Wonka alongside Tom Shadyac to direct. When Burton took over, it seemed obvious in hindsight that his long-time friend, and collaborator in films from „Edward Scissorhands” to „Ed Wood” to „Sleepy Hollow,” Johnny Depp, would be the director’s first and only choice. 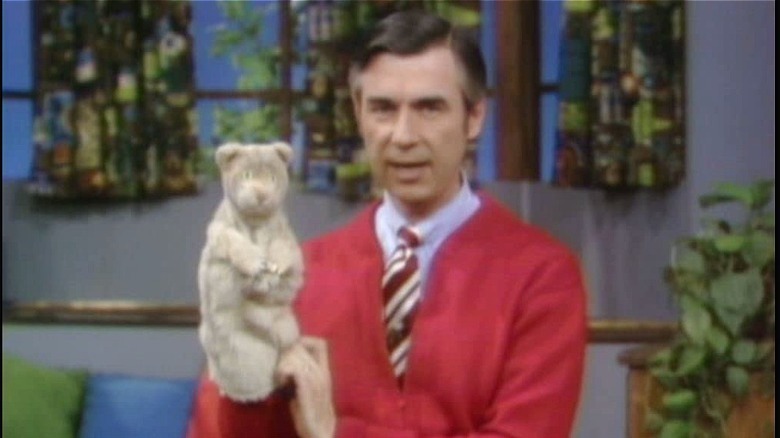 Depp’s most iconic role is almost certainly the eccentric pirate Jack Sparrow from the „Pirates of the Caribbean” movies, which the actor famously based on Keith Richards. Depp’s portrayal of Wonka, apparently, also drew from real-life.

During the initial release of „Charlie and the Chocolate Factory” in 2005, some media outlets made a comparison between Depp’s Wonka and Michael Jackson; Depp refuted the theory.

„The weird thing is, that actually never occurred to me, that there would ever be any kind of connection to Michael Jackson,” Depp told IGN in 2005. „It never entered my mind.”

Depp did attribute his inspiration for Wonka, however, to memorable children’s television hosts of the ’60s and ’70s including Bob „Captain Kangaroo” Keeshan, Fred Rogers, and „Munsters” star Al „Grandpa” Lewis.

„There were memories that I have of when I was a little kid of watching children’s shows and children show hosts,” Depp said in his IGN interview. „I distinctly remember, even at that age, their speech pattern and their kind of musical quality of the way they’re speaking to the camera, to the children.” 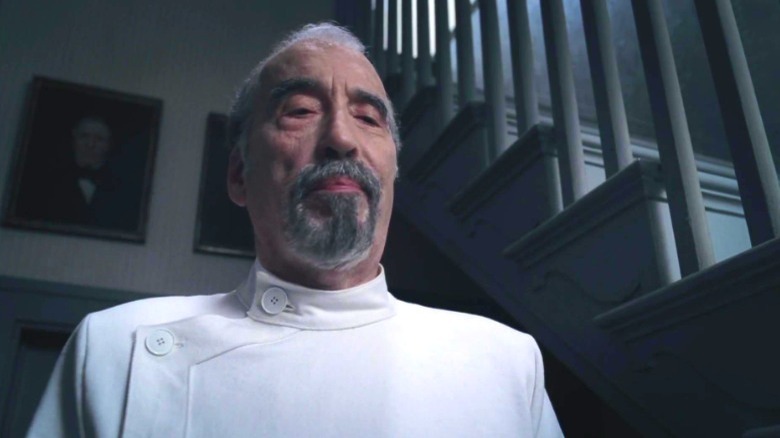 Although the filmmakers were hired to make their „Charlie and the Chocolate Factory” a faithful adaptation of the book, there were certain elements added to flesh out the film. One of the biggest was the creation of Dr. Wilbur Wonka (played by Christopher Lee), helping Burton delve into Willy Wonka’s backstory. The movie depicts Dr. Wonka, a dentist, as a domineering father who disapproves of his son’s dream of being the world’s greatest candy maker. At the film’s conclusion, Willy and Dr. Wonka reunite and resolve their issues in a heartfelt sequence.

In an interview with Blackfilm in 2005, Burton explained that this story element was inspired by his strained relationship with his parents.

„In movies, you try to work out your issues, and then you realize, those kind of traumatic issues just stay with you forever,” Burton said. An interview with The Guardian in 2012 goes into more detail about Burton’s difficult childhood, in which he described his parents as „a perfect nuclear family.”

Another detail from the film extracted from Burton’s own life experience was the scene in which Dr. Wonka’s office is filled with framed articles about his son’s success; when the director visited his estranged mother before she died in 2002, he found that she had framed posters of Burton’s films on her walls.

„It was quite horrifically touching in a way,” he wrote in the second revised edition of his autobiography, „Burton on Burton” (as per u/FionaWalliceFan in a Reddit thread). „We couldn’t really connect, but at the same time she was certainly following what I was doing.” 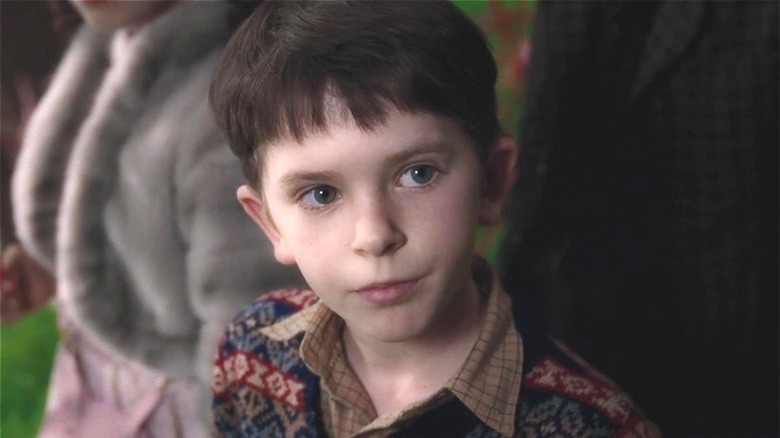 With Depp cast as Wonka, it was time to find the perfect Charlie. Children were auditioned all over the world, but it was Depp himself who suggested 13-year-old English actor Freddie Highmore.

Highmore and Depp had worked together on the 2004 film „Finding Neverland,” in which Depp played „Peter Pan” author J.M. Barrie. Depp was so impressed with Highmore’s performance that he was confident the young actor would make the perfect Charlie.

„He’s just so pure,” Depp said of his co-star. „That’s the first thing. And then you get to work with him [and] see what his abilities are as an actor. He’s super talented.”

„Johnny’s fantastic!” Highmore reciprocated. „He’s a really special person and he treats everyone as an equal and I think that’s a really good thing. Obviously, when we got together on the first day we’d already [known] each other, so it was easy to get comfortable working together. It all went good.”

How Burton made the chocolate river look so delicious 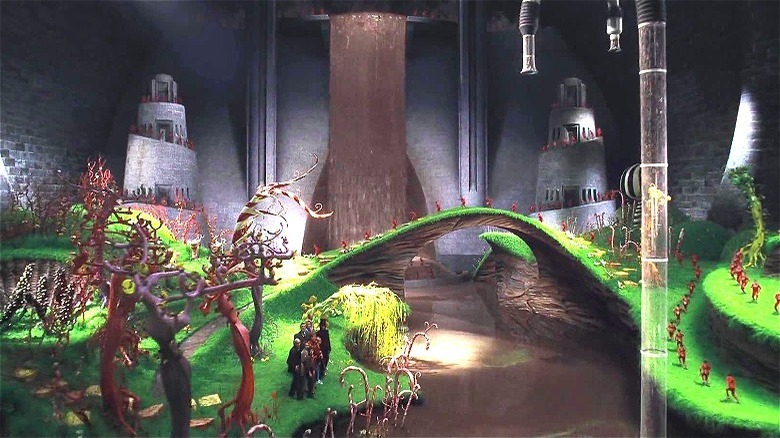 One of the most memorable scenes in both „Wonka” films is the reveal of the chocolate room.

In the latter version, the chocolate river and waterfall is the premiere feature of the vast environs of edibles. Believe it or not, all the appetizing appeal of the liquid chocolate in the scene is thanks to purely practical effects, without a drop of digital interference. Burton and his production team put a lot of thought and effort into making the delicious-looking concoction that was impossible for one little German boy to resist.

Production designer Alex McDowell told the L.A. Times that it was imperative that the chocolate river in „Chocolate Factory” surpass the look of the one in the original film, which he deemed to be „distasteful.” So, the production team went to a UK chemical company called Vickers to make the synthetic liquid that would become 192,000 gallons of chocolatey goodness for their movie. According to the CEO of Vickers, the mixture required a recipe of hydroxyethyl cellulose, food-grade biocide, and organic pigments. The company also had to build a chemical plant on the Pinewood Studios lot to keep the non-toxic, liquid chemical mixture on hand during filming.

Real squirrels were trained for the Nut Room scene 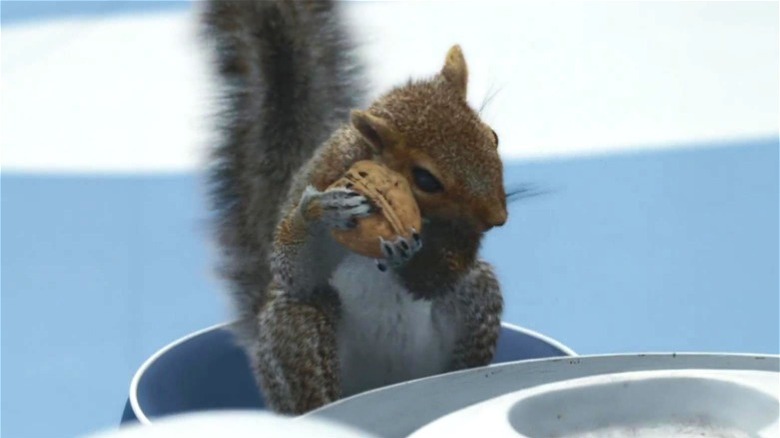 In the process of creating a more faithful „Chocolate Factory,” the 2005 filmmakers returned a scene from the book to its original form.

The memorable „Wonka” moment has spoiled heiress Veruca Salt (Julie Dawn Cole in 1971, Julia Winter in 2005) demanding something in a tantrum that keeps with her character. In the 1971 flick, she wants a golden egg from one of Wonka’s egg-laying geese; in the 2005 version, it becomes a squirrel, after she witnesses a roomful of hard-working rodents diligently sorting nuts for Wonka bars. The squirrels had been in the book, and were reinstated into Burton’s version of the movie.

During the Nut Room sequence, viewers can see a group of trained squirrels cracking and sorting nuts. While it might seem likely digital effect trickery, in fact animal handler Michael Alexander and team of four trainers worked with 40 squirrels for 10 weeks to perform their tasks on camera (albeit, aided by animatronics, computer graphics and multiple images).

As Alexander related to the L.A. Times in 2005, the squirrels’ taming began with them as newborns, bottle-fed and taught early on to bond with humans.

„Each of the 40 inquisitive rodents was given its own name,” the Times reported. „It wasn’t long before the trainers discovered that the little creatures had unique talents and personalities. Some had no interest in picking up nuts. Others wouldn’t let go of them.” 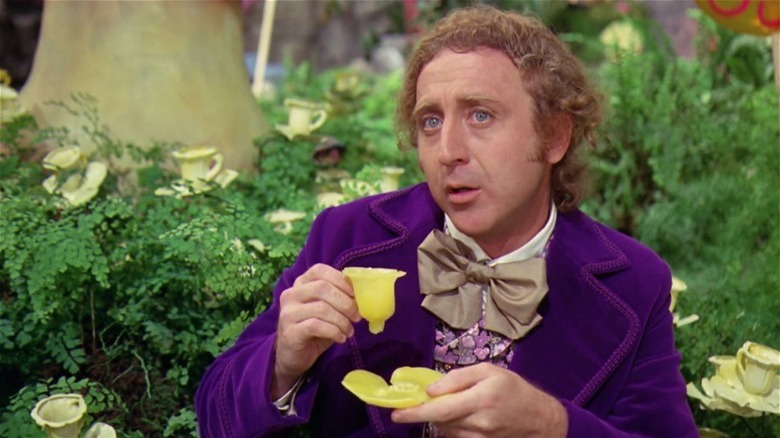 It’s impossible to not compare Burton’s „Charlie and the Chocolate Factory” with Mel Stuart’s „Willy Wonka and the Chocolate Factory.” Just thinking about the 1971 film brings the first few bars of „Pure Imagination” into one’s head. Yet, Burton and the production team from the 2005 movie were adamant that their version was not intended to be a remake. Still, there would inevitably be a divide between fans of Burton’s adaptation and lovers of the original „Wonka.”

The comparison between Gene Wilder and Johnny Depp’s portrayals of Wonka is like that of milk and dark chocolate. Wilder’s Wonka was arguably more silky-smooth and saccharine, while Depp’s had just a touch of bitterness. Though Depp reportedly voiced his admiration for Wilder’s performance (per Digital Spy), Wilder did not return the compliment.

In a 2005 interview with The Telegraph, Wilder was quoted as saying that the new film was, in his opinion, a cash-grab. „It’s all about money,” Wilder said. „It’s just some people sitting around thinking: 'How can we make some more money?’ Why else would you remake 'Willy Wonka’? I don’t see the point of going back and doing it all over again.”

Wilder continued to air his grievance in a 2013 interview with Robert Osborne, calling the 2005 film an „insult.” „To do that with Johnny Depp, who I think is a good actor and I like him, but I don’t care for that director and he’s a talented man,” Wilder said, „but I don’t care for him for doing stuff like he did.”